“Rapturous Joy Transcending Any Other”

[Excerpt from ‘The Supreme Awakening-Experiences of Enlightenment Throughout Time’ by Dr Craig Pearson, Executive Vice President of Maharishi University of Management, available at Amazon.com here]

c. 563–c. 483 BCE • NEPAL & INDIA
We know about the Buddha’s life chiefly through legends, written down several centuries after he lived. Born Siddhartha Gautama in present-day Nepal, he was a prince who lived an opulent life, shielded by his father, King Suddhodana, from the world’s travails.

At 29 he traveled out from the palace and, encountering an old man, was informed that all people, himself included, would eventually grow old. He left the palace, renouncing wealth and family, and became a wandering monk, seeking a path to end suffering.

Eventually he realized the so-called Middle Way — seeking moderation and avoiding the extremes of self-mortification and self-indulgence. At 35, meditating beneath a bodhi tree, he awoke to the true nature of reality, Nirvana.

He became known as the Buddha, the “one who has awakened.” Collections of teachings attributed to him were passed down orally and first committed to writing about 400 years later.

In various Buddhist texts attributed to the Buddha, we find him urging people to turn their attention inward, where they will experience their true self, pure and unbounded:

If you realize the self in your inmost consciousness, it will appear in its purity. This is the womb of wonder, which is not the realm of those who live only by reason.

Pure in its own nature and free from the categories of finite and infinite, Universal Mind is the undefiled wonder, which is wrongly apprehended by many.1 — Lankavatara Sutra

In this passage, the Buddha tells us that deep within we can find consciousness in its pure state, unbounded, universal, untouched by anything. 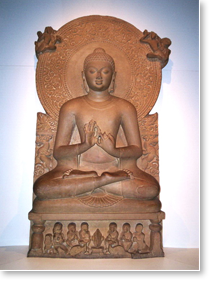 The Buddhist literature has given this “inmost consciousness” a rich variety of names: the harbor of refuge, the cool cave, the island amidst the floods, the place of bliss, emancipation, liberation, safety, the supreme, the transcendent, the uncreated, the tranquil, the home of peace, the calm, the end of suffering, the medicine for all evil, the unshaken, the ambrosia, the immaterial, the imperishable, the abiding, the farther shore, the unending, the supreme joy, the ineffable, the detachment, the holy city, and others.2 These names give us a feeling for the nature of this inner field of consciousness and the degree to which it has been revered.

And the Buddhist literature furnishes many descriptions of how, when the mind becomes still, this inner field opens to one’s experience. Here, for example, is a passage from the Dhammapada, traditionally attributed to the Buddha himself and one of the best known texts in the Theravada school, the oldest surviving school in Buddhism:

The one who has entered a solitary place,
Whose mind is calm and who sees the way,
To that one comes insight and truth
And rapturous joy transcending any other.3 — Dhammapada 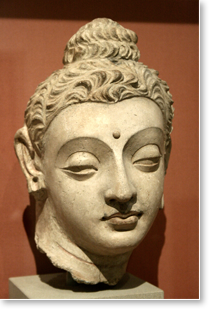 A questioner asked the Buddha: “I would like to know about the state of peace, the state of solitude and of quiet detachment. How does a person become calm, independent, and not wanting to grasp at anything?” . . .

[The Buddha replied]: “The person should look for peace within and not depend on it in any other place. For when a person is quiet within, the self cannot be found. There are no waves in the depths of the ocean, it is still and unbroken.”4
— Sutta Nipata

We find peace within, the Buddha says, when the mind becomes still and we transcend our ordinary, limited self.

There is a sphere where there is neither earth nor water nor heat nor air, for it is beyond the field of matter; nor is it the sphere of infinite space, or consciousness, for it is beyond the field of mind. There is not the condition of nothingness, neither is there the state of this world or another world, nor sun nor moon. This is the uncreated.

This condition I call neither arising nor passing away, neither dying nor being born. It is without form and without change. It is the eternal, which never originates and never passes away. To find it is the end of sorrow.5
— Udanna Sutta

Here again we are told about a field beyond all relative values, uncreated and eternal — the transcendental field. The final sentence, eight short words, tells us we can experience it directly and derive infinite benefit.

An effortless technique for diving within

The Buddha is talking about the same thing we find expressed in traditions worldwide — the summons to look within, to discover the inner treasure we each carry within us — waiting to be experienced, awakened, lived in our daily lives.

And just how do we do this?

In the mid-1950s Maharishi Mahesh Yogi came out of the Himalayas and began teaching a simple, natural effortless meditation technique that had been handed down through the millennia in the world’s oldest continuous tradition of knowledge, India’s Vedic tradition.

Life is meant to be enjoyed, Maharishi taught — the purpose of life is the expansion of happiness. And the technique he taught was designed to enable every human being effortlessly to dive within and experience the ocean of unbounded bliss deep within.

This was the Transcendental Meditation technique. Over more than 50 years now, millions of people around the world — people of every age, nationality, and religious, cultural, ethnic, educational, and economic background — have learned this simple procedure and have enjoyed its benefits.

And over that time the Transcendental Meditation technique has become the most extensively research and thoroughly documented program of personal development in the world. More than 350 peer-reviewed studies have been published in medical and scientific journals, documenting benefits in every area of life — improved mental capacities, better health, enhanced development of personality, better relationships, even improved quality of life for the whole society. The Transcendental Meditation technique has been applied in education, business, medicine and health, rehabilitation, and substance abuse, with unparalleled results.

The Buddha gave to the world a profound vision of the full potential of human life, centered in awakening the unbounded potential within. Maharishi has given us the gift of a simple, effortless procedure for doing exactly this.