“Transcending all knowledge” – St. John of the Cross

Born near Avila, Juan de Yepes Álvarez entered the Carmelite order when he was 21 and moved to Salamanca, in western Spain, where he studied philosophy and theology at the university there. At 25 he was ordained a priest.

Around this time he met St. Teresa of Ávila, who inspired him with her work in reforming the Carmelite order, seeking to restore its original contemplative character. St. John worked with her for the next ten years, establishing and helping administer monasteries around Spain.

A group of his superiors, trying to counter their efforts, jailed him when he was 35. Though a higher Carmelite authority approved his work, he was imprisoned for nine months and treated harshly. Out of his tiny cell came his most famous work, The Spiritual Canticle. After nine months he escaped and continued his work. He was canonized in 1726, and in 1926 he was made a doctor of the church, the highest honor.

In his writings, St. John describes experiences that remind us of transcending — the experience during Transcendental Meditation practice of the mind settling inward, beyond thought and perception, to a state of quiet inner wakefulness and deep peace.

St. John compares this experience to waking up:

[The soul] is moved and awakened from the sleep of natural vision to supernatural vision. Hence [one] very adequately uses the term “awakening.” [1] 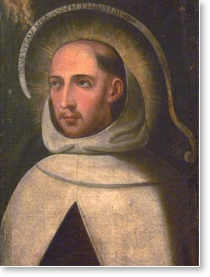 His soul in its simplicity and purity will then be immediately transformed into simple and pure Wisdom. [2]

The restfully alert state naturally elicited by the Transcendental Meditation technique is a fourth major state of consciousness, beyond the familiar states of waking, dreaming, and sleeping. Maharishi calls it Transcendental Consciousness and describes it as a state of knowingness, the experience of pure knowledge, consciousness aware of itself alone — “pure Wisdom,” in St. John’s words.

In The Spiritual Canticle, St. John tells us that though it is ultimately beyond words, it is a state of refreshing bliss in which the soul (consciousness) is unified with itself:

[T]his song is so charming it enraptures and enamors its hearers and makes them forget all things as though they were in a transport. Similarly the delight of this union absorbs the soul within herself and gives her such refreshment.” [3]

In The Ascent of Mount Carmel, St. John describes another benefit of this experience:

This knowledge savors of the divine essence and of eternal life. . . .
Some of these divine touches produced in the substance of the soul are so enriching that one of them would be sufficient not only to remove definitively all the imperfections which the soul would have been unable to eradicate through its entire life, but also to fill it with virtues and blessings from God. [4] 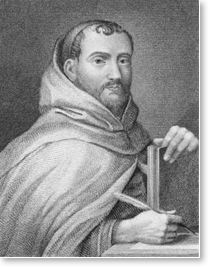 The deeply restful state of Transcendental Consciousness gives the body the opportunity to dissolve stress with exceptional efficiency. At the same time, the mind has settled into in its source, pure consciousness, a field of infinite creativity and intelligence.

St. John gives us his most extended description of this experience in his poem “Stanzas Concerning an Ecstasy Experienced in High Contemplation.” He closes each stanza with the phrase transcending all knowledge. By this he means going beyond anything that can be known intellectually by the mind — transcending all thought, all mental content.

I entered into unknowing
Yet when I saw myself there
Without knowing where I was
I understood great things;
I shall not say what I felt
For I remained in unknowing
Transcending all knowledge.

That perfect knowledge
Was of peace and holiness
Held at no remove
In profound solitude;
It was something so secret
That I was left stammering,
Transcending all knowledge.

I was so whelmed,
So absorbed and withdrawn,
That my senses were left
Deprived of all their sensing,
And my spirit was given
An understanding while not understanding,
Transcending all knowledge.

And this supreme knowledge
Is so exalted
That no power of man or learning
Can grasp it;
He who masters himself
Will, with knowledge in unknowing,
Always be transcending.

And if you should want to hear:
This highest knowledge lies
In the loftiest sense
Of the essence of God;
This is a work of His mercy,
To leave one without understanding,
Transcending all knowledge. [5]

St. John describes a state in which his senses have turned within, leaving his consciousness “in profound solitude,” awake and alone by itself. In this state of “perfect knowledge,” of “peace and holiness,” all other knowledge “now seems worthless.” Here again St. John’s words parallel Maharishi’s description of Transcendental Consciousness.

St. John of the Cross treasured this experience — nothing was more valuable. It was the source of his spiritual strength and ultimately his greatness. 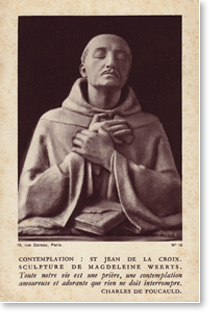 St. John of the Cross

We are fortunate today in having a simple, natural, effortless procedure, the Transcendental Meditation technique, that enables anyone to have the beautiful experience of transcending described by St. John of the Cross, also by St. Teresa of Avila, and by so many other great figures across time and across the world.

The Transcendental Meditation technique is not a religious practice. People of every religion and cultural background practice it — and often find that the resulting growth of consciousness deepens their appreciation of the true meaning of their religion. This in addition to the countless other benefits documented in more than 650 scientific research studies — increasingly integrated brain functioning, increased creativity and intelligence and moral maturity, improved health and well-being, balanced personality development, warmer personal relationships, and much more.

Every person on earth has the natural ability to transcend, to experience this fourth major state of consciousness and enjoy the multitude of benefits it brings. The experience of transcending is natural and universal and profoundly valuable. Thanks to Maharishi, there is now a simple technique that opens the door to this inner treasury to everyone.

He holds a PhD in Maharishi Vedic Science from MUM and is the author of two books on the development of full human potential, The Complete Book of Yogic Flying and The Supreme Awakening: Developing the Infinite Potential Within (forthcoming). He is also a member of the Board of Directors of Maharishi School of the Age of Enlightenment.