Ralph Waldo Emerson – Within Man Is The Soul Of The Whole; The Wise Silence; The Universal Beauty

In 1836, an essay entitled Nature was published anonymously. It created a great stir, especially among college students, who formed clubs to discuss it.

The essay marked the beginning of a movement that came to be called American Transcendentalism and influenced the entire nation — an influence we continue to feel today.

The author of Nature, and the founder of American Transcendentalism, was Ralph Waldo Emerson.

Emerson had come from a long line of clergymen. He entered Harvard when he was 14 and became a minister at 26. He was a popular sermonizer. But he abandoned the ministry to lecture and write. He was considered one of America’s foremost orators, and his journals form one of the world’s great documents of spiritual growth. His primary source of inspiration was the Vedic literature, which gave expression to his own experience. 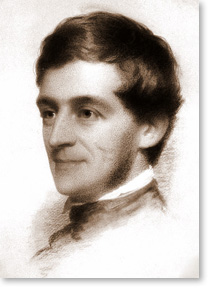 American Transcendentalism is often regarded as an intellectual and social movement. But as Emerson and Thoreau (another founder of the movement) make clear in their writings, they were impelled by transcendental experience. In their writings they give us clear descriptions of these inner experiences. Here is a passage from Emerson’s famous essay “The Over-Soul”:

Yet there is a depth in those brief moments which constrains us to ascribe more reality to them than to all other experiences. . . .

[T]hat great nature in which we rest, as the earth lies in the soft arms of the atmosphere [is] that Unity, that Over-Soul, within which every man’s particular being is contained and made one with all other. . . . We live in succession, in division, in parts, in particles. Meantime within man is the soul of the whole; the wise silence; the universal beauty, to which every part and particle is equally related; the eternal One. And this deep power in which we exist, and whose beatitude is all accessible to us, is not only self-sufficing and perfect in every hour, but the act of seeing and the thing seen, the seer and the spectacle, the subject and the object, are one. We see the world piece by piece, as the sun, the moon, the animal, the tree; but the whole, of which these are the shining parts, is the soul. . . .

All goes to show that the soul in man is . . . the background of our being, in which they lie, — an immensity not possessed and that cannot be possessed. From within or from behind, a light shines through us upon things, and makes us aware that we are nothing, but the light is all. A man is the facade of a temple wherein all wisdom and all good abide. . . . When it breathes through his intellect, it is genius; when it breathes through his will, it is virtue; when it flows through his affection, it is love. . . .

Of this pure nature every man is at some time sensible. Language cannot paint it with his colors. It is too subtle. It is undefinable, unmeasurable, but we know that it pervades and contains us. We know that all spiritual being is in man. . . . We lie open on one side to the deeps of spiritual nature, to the attributes of God.

What is Emerson talking about? First, he is describing not just an idea or an intellectual insight but a unique experience. These experiences come only as “brief moments” — but they contain “more reality” than “all other experiences.” At such moments, he believes, he experiences what is ordinarily hidden — “the soul of the whole,” the source of his being, the source of life itself. To this inner field of life he gives the name Over-Soul.

A fourth state of consciousness

This inner field of life, he goes on to tell us, lies beyond all diversity. It is a unity, “the eternal One.” When he experiences this unity, he says, “the act of seeing and the thing seen, the seer and the spectacle, the subject and the object, are one.” 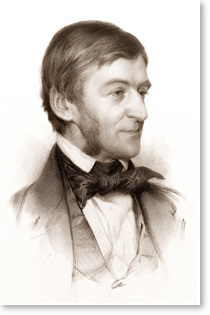 Emerson is describing the experience of the fourth state of consciousness, a state beyond the familiar states of waking, dreaming, and sleeping. This is the state Maharishi calls Transcendental Consciousness. In this natural state, which Maharishi describes as “the simplest form of human awareness,” the mind has settled inward, beyond all perception, thought, and feeling. The mind becomes restful yet remains fully awake and alert.

What is consciousness aware of in this state? Itself alone — one experiences consciousness in its pure state, silent and unbounded. Consciousness becomes its own object. In Transcendental Consciousness, “the subject and the object,” as Emerson writes, “are one.”

No experience is more valuable than this, Emerson declares. Within us, he says, is “the temple wherein all wisdom and all good abide.” This is the source of genius, virtue, and love. It is “unmeasurable,” he says, but “we know that it pervades and contains us.”

Throughout his writing Emerson refers to the experience and understanding of consciousness in its unified state. And he consistently identifies this level of awareness as the source of natural law.

Emerson writes about this experience again, in this well-known passage from his essay “Self-Reliance”: 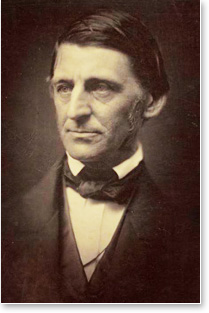 For, the sense of being which in calm hours rises, we know not how, in the soul, is not diverse from things, from space, from light, from time, from man, but one with them and proceeds obviously from the same source whence their life and being also proceed. We first share the life by which things exist and afterwards see them as appearances in nature and forget that we have shared their cause. Here is the fountain of action and of thought. Here are the lungs of that inspiration which giveth man wisdom. . . . We lie in the lap of immense intelligence. . . .

Here again he describes his experience of “being,” the source of thought and the source of creation itself, “the life by which all things exist.” He captures the identity between human consciousness and the unified field, nature’s infinite intelligence.

“Whenever a mind is simple,” Emerson says later in the same essay, it “receives a divine wisdom.” Transcendental Consciousness, the field of pure knowledge, is the simplest form of human awareness.

The simplest form of awareness

This inner field of life has been given many names throughout the centuries. For Laozi it is the Tao. For Plato it is the Good and the Beautiful. Aristotle calls it Being, Plotinus the Infinite, Jesus the kingdom of Heaven within. In Judaism it is known as Ein Sof.

Whatever it may be named, it is the same universal, unbounded field of consciousness that rests within each of us, waiting to be experienced and awakened — the same universal field of intelligence that gives rise to nature itself.

Emerson’s experiences of pure consciousness were apparently rare and fleeting. He had no way of inducing them. Brief though they were, they endowed him with a vision of life that resonated with some of the greatest minds of his time and continues reverberating today.

From Maharishi and from the ancient Vedic tradition we now have a simple, natural, and effortless technique for having this treasured experience at will. The Transcendental Meditation techniqueallows the mind effortlessly to settle inward, to experience “the wise silence,” as Emerson calls it, twice each day. It is easily learned, easily practiced, and immensely valuable.

Published with the permission of Dr. Craig Pearson, Executive Vice-President of Maharishi University of Management in Fairfield, Iowa. He holds a PhD in Maharishi Vedic Science from MUM and is the author of two books on the development of full human potential, The Complete Book of Yogic Flying and The Supreme Awakening: Developing the Infinite Potential Within (from where this article originates).